You are here: Home » About » Biography 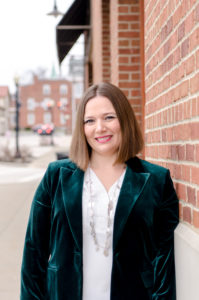 Courtney Fint Zimmerman is an architectural historian and registered professional engineer who has made the balance of art and science her life’s pursuit. Courtney’s interests in both architecture and engineering led her to obtain a bachelor’s degree in Civil Engineering from West Virginia University, graduating magna cum laude. Her intentions to study architecture in graduate school faded when she discovered graduate programs in historic preservation and realized that her passion was preserving the old rather than creating the new. She graduated with a Master of Science in Historic Preservation from Columbia University, where her thesis won the 2003 Voorsanger Writing Prize for Architectural History.

Courtney worked as a structural engineer for the Washington, D.C., office of Robert Silman Associates, one of the nation’s premier preservation engineering firms. While with RSA, she was privileged to work on national treasures, including the Virginia State Capitol, the United States Supreme Court, and Woodlawn Plantation. She then transitioned into architectural history, environmental review, and research with the West Virginia Division of Highways. In her 6 years with the DOH, Courtney performed in-depth historical research for transportation projects throughout the state, coordinated reviews and negotiations between a wide variety of government agencies and individuals, and led efforts to streamline the environmental review process. Courtney’s multidisciplinary background has proved to be a great benefit in communicating with historians, engineers, preservationists, property owners, and members of the public to find common ground and positive solutions.

Since founding Aurora Research Associates in 2011, Courtney has continued to provide expert guidance and consulting services in Section 106 review, architectural survey and documentation, and historic research and preservation to clients, including the West Virginia DOT, City of Akron, environmental, architecture and engineering firms, West Virginia State Historic Preservation Office, and local preservation organizations. Courtney has completed a number of National Register nominations and countless historic resource surveys and determinations of National Register eligibility. An enthusiastic instructor and public speaker, she was selected as a presenter at the national Historic Roads Conference in 2008 and 2010 and is a published author. Courtney was selected as a participant in the Akron Leadership/Women’s Network Community Leadership Institute in 2018 and takes an active interest in community preservation and revitalization.